Make an Appointment
Welcome, you may remember us as Victor Advanced Chiropractic, we have rebranded as Modern Chiropractic.
585 398 1201

We offer a wide range of services to help you feel better and move better.
Our mission is to humbly serve our community by inspiring families toward a more natural path to optimal health.  Our goal is to correct any root causes of pain, such as vertebral subluxation, in order to remove nerve interference and balance physiology through advanced technologies with the expectation of fast pain relief and improved quality of life.
We compassionately provide excellence in Chiropractic care faithfully assisting the body’s own inherent recuperative powers.
Contact us today to schedule your next appointment and begin the process of living and optimized life that is pain free. 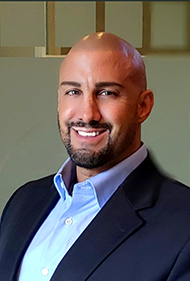 Dr. Ferris served in the United States Army on Active Duty in a mechanized infantry unit with the Second Armored Division in Fort Hood, Texas. In 1991, after completing his duty with an honorable discharge, he was reactivated to duty in support of Operation Desert Storm. Dr. Ferris continued to serve his country for 11 more years in the United States Army Reserves as a Chaplain Assistant.

Dr. Ferris graduated from Bowling Green State University with a bachelor’s degree in Biology. Thereafter, he began a career with Johnson and Johnson selling pharmaceuticals. After many successful years with JNJ and looking for a new challenge, he accepted a position with Tyco Medical Division. With Tyco he sold medical devices in the operating room to surgeons and hospitals. Having a unique, up close and personal perspective on a medical model largely dependent on “drugs & surgery”, Dr. Ferris began to become disillusioned with a healthcare system heavily influenced by enormous marketing efforts by “Big Pharma”. It was at this time that a friend recommended he visit a Chiropractor for low back pain. This decision sprouted a turning point as Dr. Ferris personally benefited from complimentary and alternative medicine (CAM). Awakened by the fact that the human body was designed with an inherent recuperative power capable of healing without the use of drugs and surgery most of the time, he reevaluated the direction of his career and life. In January 2002, he enrolled at New York Chiropractic College.

During his time at NYCC, Dr Ferris served as Vice President of his class. He was also the Vice President of the CBP club. While in college, Dr. Ferris challenged himself by completing over 150 hours of “post graduate” training. By October of 2005, he opened up Victor Advanced Chiropractic, and later rebranded it as Modern Chiropractic to reflect the numerous innovations that differentiate the clinic in this region of the country.

Today Modern Chiropractic is firmly established as the regions most technologically advanced Chiropractic clinic in Rochester, NY. In creating Modern Chiropractic Dr. Ferris committed himself to investing in the latest breakthrough technologies to conquer pain and optimize health. Among the awe inspiring scientific and technological advances that have the potential to change patients lives in dramatic ways are the following: SPINEMED™ Non-Surgical spinal decompression therapy. LITECURE LCT 1000™ CLASS 4 Deep Tissue LASER, CRYOFOS™ just introduced in North American in 2018, Active Release Technique™, Functional Medicine, ChiroClub™ including Zero Gravity Tranquility Chairs, and HYPERVOLT™. Now established for over 13 years, he and his team of experts have been privileged to serve and treat over ten thousand new & existing patients. Experienced, caring, and equipped with advanced technology Dr. Ferris has been honored by several leading organizations. These organizations specialize in recognizing and commemorating the achievements of today’s most influential and respected doctors in alternative medicine. These awards celebrate his accomplishments, commitment to quality outcomes, and high standard of patient care. Top Chiropractor Rochester, NY 2018. Top 10 Best Patient Satisfaction rates 2016, 2017, 2018, 2019, 2020, 2021 by Distinguished Doctor Award.

With a philosophy of serving the underserved, Modern Chiropractic joined forces with the faith- based philanthropic organization, Chiropractors with Compassion. Together with hundreds of other Chiropractors throughout the U.S. and Canada, they have contributed to hundreds of thousands of dollars distributed annually to needy children in Africa. Education, food and infrastructure such as clean water and sewage systems, are all made possible by Chiropractors with Compassion. Dr. Ferris feels privileged to have joined hands with such an organization.

Dr. Ferris was raised in Cleveland, Ohio by two loving parents and is the youngest of three brothers. Dr. Ferris owns a Boxer named Champ, arguably the world’s most handsome boxer. 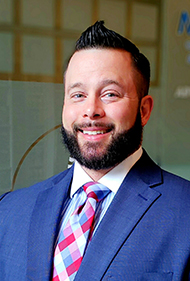 During his teens and throughout his twenties Dr. Derek Johnstone was an avid powerlifter and traveled extensively to attend competitions. This demanding form of training set the foundation for Dr. Johnstone’s interest in the physiology of the body. This interest culminated in his attending Ithaca College in the fall 2001 to obtain a bachelor’s degree in Exercise Science. While on break in the summer of 2002 he was involved in a very serious motorcycle accident which almost resulted in loss of his left arm. After many surgeries to repair the damage, he retained full use of his arm however he had no sensation from his neck to the fifth digit on the entire left side of his upper body. After two years of failed attempts to heal his arm by mainstream medicine Dr. Johnstone was almost about to give up. A friend who was attending Chiropractic college encouraged him by asking “What do you have to lose? Come in for a visit.” After following through on that visit his life dramatically changed.

During his visit there he met with a Chiropractor who offered to treat his left arm. Through a series of treatments of Chiropractic adjustments and soft tissue treatments called Active Release Technique™(ART) he regained almost 95% of the sensation to his arm after only 8 weeks. The very next semester Dr. Johnstone enrolled at New York Chiropractic College and completed his doctorate degree in 2008. Dr. Johnstone is nationally Board Certified and is licensed in the state of New York. He currently lives in Pittsford with his wife Melanie and his 6-year-old daughter Gabrielle. He still loves working out and catching Buffalo Bills games even if they don’t win.

Check out our range of services to help you.